Fewer occasions exemplify vision and honor than the one that occurred November 5, 2018. 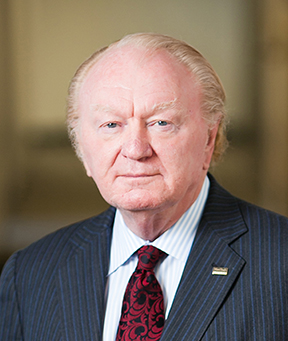 At the annual Northern Virginia Chamber of Commerce/Professional Services Council Greater Washington Government Contractors Awards dinner, I had the pleasure to introduce and observe as ManTech’s founder and Chief Executive, George J. Pedersen, was inducted into the GovCon Hall of Fame.

This is a distinction granted only the stellar few. Family, friends and members of our executive team were present to watch as Mr. Pedersen took the stage and I gave a brief tribute as prelude to showing ManTech’s 50th Anniversary video.

To think that it all began in a tiny two-room office in Livingston, New Jersey, and with a single contract from the Naval Ordnance Laboratory. From there Mr.  Pedersen, who is also chairman of ManTech’s board, would push the ‘liftoff’ button on a 50-year venture that has now soared to 8,000 employees, $1.9 billion in revenue – and the promise of an even more stellar future.

As I shared with the audience of roughly 1,000 guests: “This award should not come as a surprise to anyone, because George’s achievements and impact in this town warrant his induction into the GovCon Hall of Fame. It is only fitting that he receive this acknowledgement in the 50th anniversary year of the company he founded. This award is about the profound influence and impact George’s work and vision in at ManTech have had in shaping an entire industry.”

And indeed it did. ManTech has grown from a single award with one military branch to a versatile company supporting every facet of the U.S. Defense Department, plus the intelligence community and many federal civilian agencies through some 900 contracts.

But if you were to ask George what makes him proudest, he would share that it was his role in creating a unique culture at ManTech, where people make dedication to the mission their No. 1 priority.

Today, when we focus not only on giving soldiers an edge on the battlefield, but also on the sustainment and enhancement support that saves life and limb, and keep the IC ahead of threats in the physical and virtual worlds, and commit immeasurable hours to modernizing IT for Federal Civilian customers – credit the example and encouragement of George J. Pederson.

Thank you, George, for your service to our nation from the past to the present, and for how your work is “securing the future” of the United States. And congratulations on your induction to the GovCon Hall of Fame, where your achievements will serve as both model and inspiration to all who follow in the years ahead.