When did you first come to work for ManTech? 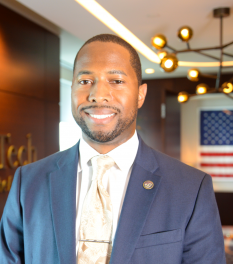 What type of work did you do and how long did you stay?

As a soldier who previously deployed in the Army National Guard, I decided to take a break in service and I accepted an opportunity to support Special Operations Command in Iraq. As a video teleconference (VTC) team lead, I directly supported two U.S. Special Operations commanders and their command staff with VTC operations and maintenance. I was proud to support the ‘tip of the spear’ warfighters across the Middle East, Horn of Africa and within the United States.

Why did you leave?

After nearly 2 ½ years overseas, I returned to the Washington, D.C., area to rejoin my family.

When did you come back and what brought you back?

I returned to ManTech in December 2017. For a little background: I grew up across the Hudson River from the World Trade Center and felt a profound calling to serve after 9/11. So I joined the National Guard one month after the terrorist attacks. After leaving ManTech in 2010, I supported federal civilian agencies in many capacities, but missed the work of supporting the Defense Department. I was blessed to have the opportunity to return and work with some of the highly-skilled cyber professionals maintaining the integrity of the DoD Information Network. It felt like I was returning home.

How would you describe ManTech’s culture?

ManTech has built a solid reputation over the past 50 years as a strong partner to the DoD, supporting the various services across the globe – which I love to hear time and again. As ManTech broadens its range of the customers we support and the fields of our expertise, the culture of attracting highly skilled professionals remains unchanged. We continue the company’s rich history of successful contributions to our customers’ missions and we play an important role in securing and strengthening our nation.

Would you refer a friend and what would you tell them about working here?

I already do. It is such a great place to work and the support we provide to our partners and customers is rewarding. I think of ManTech as a place where dutiful professionals aspire to come – whether it’s for a few years to further develop their skill set and acquire additional experience in support of a rapidly developing career, or to remain longer in a role making an impact on a specific mission.